Earlier this year on Anzac Day my post “Aussie Sacrifices” focused on my late father, Alfred Ernest Morrison, and some of his wartime experiences, especially as a Japanese prison-of-war. We are now about to commemorate 75 years since the end of World War Two and within another three weeks on 6 September our family will also remember the passing of our father 25 years ago. 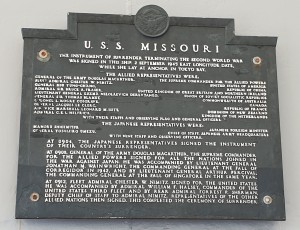 The war in the Pacific ended in practical terms with the unconditional surrender announcement by Emperor Hirohito on 15 August 1945, or as Americans prefer to commemorate with the signing of the surrender document on 2 September on the U.S.S Missouri in Tokyo Bay. Either way the end of hostilities set off celebrations throughout the world, and I would like to share more of my father’s story of those terrible times.

Alfred (Alf) Ernest Morrison grew up in Bankstown, New South Wales and although his parents had separated he was always close to his mother, Carrie, and had the support of a close extended family. It was not an easy time during those depression years in the working-class environment of Bankstown and despite liking to smoke and drink and to swear a little too much, the sense of family instilled in him a stable foundation. 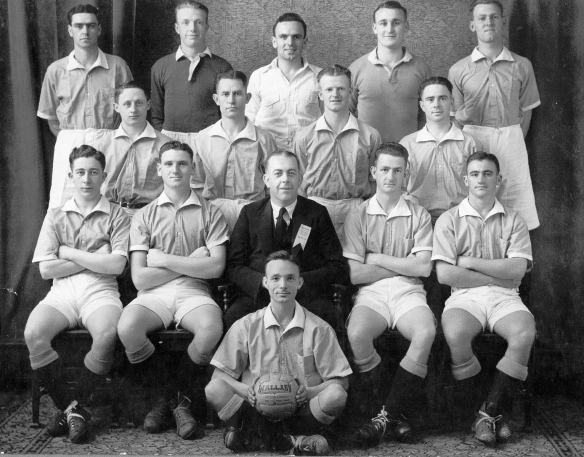 He was an athletic young man through his school days and soccer was one of a number of sports he played. In 1937 at the age of 21 years he represented that New South protestant Churches team in Queensland. He served his apprenticeship to become a carpenter so when he enlisted in the army in 1940 he was fit, strong and healthy and this, together with the importance placed on mates in “the team”, would have undoubtedly stood him in good stead for what was about to follow.

Alf was in Singapore with the 2/12 Field Company, Eighth Division when it fell to the Japanese on 15 February 1942, starting exactly three and half years of captivity along with thousands of other Allied prisoners. The Fall of Singapore led to much uncertainty and worry for the fate of service men and women and it appears that little news of Alf reached home for a year or more.

Alf’s army service records show that Carrie first formally inquired about Alf only a month after the fall of Singapore and five months later he was reported missing and it wasn’t until September 1943 that he was officially known to be a prisoner-of-war.

When this information reached home, Alf would have already been with F Force on the Thailand-Burma railway for five months. F Force ended up at Sonkurai No, 3 Camp  229.20 km in Thailand mainly for construction of foundations of a big railway bridge across the river. Kami Sonkurai was the most remote of the POW camps on the rail line and had the highest death rate of all POW camps. There, rations were grossly inadequate, with almost no medical supplies and very little kitchen equipment or containers. A cholera epidemic at the camp was a particular problem. In the 1995 Changi Diary we read how “We learned the value of discipline … We learned to see the difference between good hygiene and bad” and this saved many lives among the Aussie POWs especially.

It was said that “next to cholera, tropical ulcers were the the worst thing to happen to you” (Bowden, Tim, Changi Photographer). During his time on the railway, Alf suffered from tropical ulcers on both feet, which could have easily led to amputation, but certainly resulted in bad scarring. On the completion of the ‘Railway’ POWs were transported first to Kanburi recovery camp and then by December 1943 back to Changi where they remained until the Japanese surrender.

His service records indicate that a card was received from Malaya in October 1944, and the next item on this record card, corroborated by a letter from a Hexham radio enthusiast listening to a Singapore station, was of a message home from Alf stating that he was “well and in good spirits”.

Word of the Japanese surrender filtered into Changi in the middle of August 1945 as did more plentiful Red Cross supplies, but it was not until a pamphlet drop from Allied planes on 28 August that POWs truly knew the war was over. The pamphlet emphasised that “if you have been starved or underfed for long periods DO NOT eat large quantities of solid food, fruit or vegetables at first.”The next few weeks enabled the ex-POWs some time to recover before being shipped home.

On 21 September, Alf embarked on the liner Largs Bay heading Australia. His telegram home was dated 25 September, but this belated message was probably due to the large volume of telegrams being sent by the men. 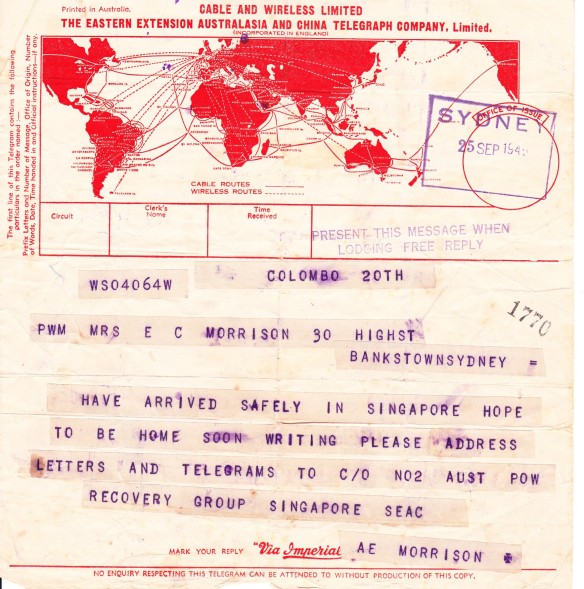 The Largs Bay docked at No. 11 Wharf, Wolloomooloo on 10 October 1945. The public was not allowed on the wharf itself but big crowds with their flags and confetti gave the home-comers a joyous welcome. The men were bused to camp at Ingleburn for their final assessment before greetings relatives and friends.

Welcome home picnic for Alf at Ingleburn with family and friends.

An Australian Women’s Weekly article on 27 October, which also included a photo (similar to the above) of Alf’s family gathering at Ingleburn, spoke of more than 5000 people being present to welcome home about 1000 returned prisoners of war. By this time the returned prisoners having had two months of recovery were in a pleasantly healthy condition.

Within a year Alf had married Bankstown girl, Norma Bray, who through the next forty-nine years was a loving wife, mother to their children and Alf’s carer as the effects of his incarceration manifested themselves. Of the two it was probably Norma who was less forgiving of the Japanese as she witnessed Alf’s deterioration. However maintaining contact with members of his old unit throughout his life and a long-anticipated trip to Thailand seemed to bring a degree of closure. Although hostilities ceased in August 1945, I have no doubt that Alf’s War only finished with his death in 1995.

So, with due respect to all who served in World War Two, at this time I believe it is fitting that we commemorate the sacrifices of all those who served in the Pacific war against Japan. Alf’s War is just one example of those sacrifices.

The world has moved on in the last 75 years and old enemies are now friends and allies, which is probably as it should be if we want a peaceful future. My own concerns about Japan, its people and the War were laid to rest when I visited a few years ago, and assigned to history … but Kipling’s words should live forever…