While on a recent family history road trip in Victoria, which was otherwise unfruitful, I saw the turn-off to Malmsbury (some 86 kms north-west of Melbourne), alerting my genealogical antenna with its connection with my great-great Grandfather, Edward Leech.

Some time ago I was contacted by Susan Walter, who was undertaking a PhD thesis entitled ‘Malmsbury Bluestone and Quarries: Finding Holes in History and Heritage’. During her research Susan came across the 1861 birth record for Martha Elizabeth Leech at Malmsbury and finding my family website where my Leech family is identified, she took the trouble to email me. At the time I had no idea that Edward and his family had lived anywhere else but Sydney after their arrival from England, but more of that shortly.

Of course I took that turn-off.

The connections were due to Edward being a stonemason and the building of the Malmsbury railway viaduct using the local bluestone. The viaduct is a significant historic structure and was the largest masonry arch railway bridge in Victoria at the time. It has 5 spans totalling 100 meters long and is 25 metres high. The dark blue granular basalt, or bluestone, quarried in Malmsbury was used widely on important buildings throughout Victoria including Parliament House. 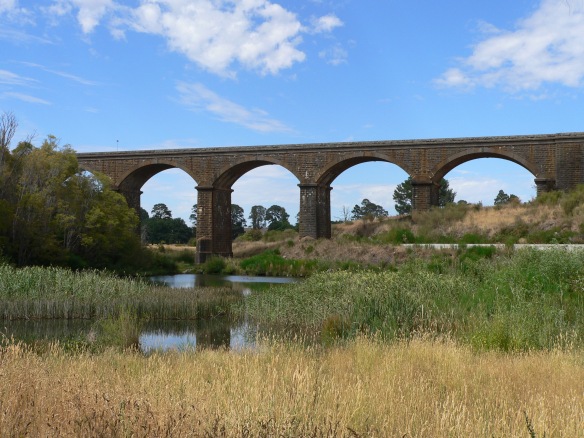 The bridge itself was part of the railway line connecting Melbourne and Bendigo over the Coliban River where prospectors used to cross on their way to the Castlemaine goldfields. The viaduct itself was constructed between 1858 and 1860 with the railway opening in July 1861.

All the documentation relating to Edward Leech refers to him as a stonemason. He was born in 1812 in the Herefordshire village of Wellington where his father Anthony Leach was also born. Wellington is 51/2 miles north of Hereford on the Leominster Road and seems to have had a relative static population over the years of between 600 to 700 people. Its parish church dates from the 12th century and has been added to over the centuries. There is a quarry less than a mile from the village which probably gave Edward his living.

No other record was found of him or his family in the area. He is not found in the 1841 or 1851 censuses and it is assumed he moved to the London area where on 1 August 1852 he married Martha Thwaites at Kennington in Surrey, although according to informant, Edward on the NSW birth certificate of his daughter, my great grandmother, Emmelina it was at Camberwell in London.

On 30 September 1854 he departed from the Port of London on the ship Queen of England with Martha and daughters Mary Jane and Anne bound for New South Wales. The family reached Sydney on 9 January 1855 and when Emmelina was born on 30 August 1856 they were living at Maryland, Camden, County of Cumberland. The Maryland homestead and outbuildings are historically significant and some are made of stone masonry. It is not known whether Edward was involved in their construction.

Being a stonemason and it is assumed that work on the Malmsbury viaduct took him and the family to Victoria where baby Martha Elizabeth was born on 14 February in 1861.

Soon after the new daughter and the opening on the railway the “Leich family”, in August 1861, is recorded on local shipping aboard the Wonga Wonga from Melbourne back to Sydney. By 1864 home was at Botany Road, Waterloo where Edward lived until he died on 19 September 1877. Within two years Martha was also dead. They were buried next to each other at the Necropolis, Rookwood Cemetery. Of their four daughters two were already married and Emmelina and Martha Elizabeth were wed in the year of their mother’s death. 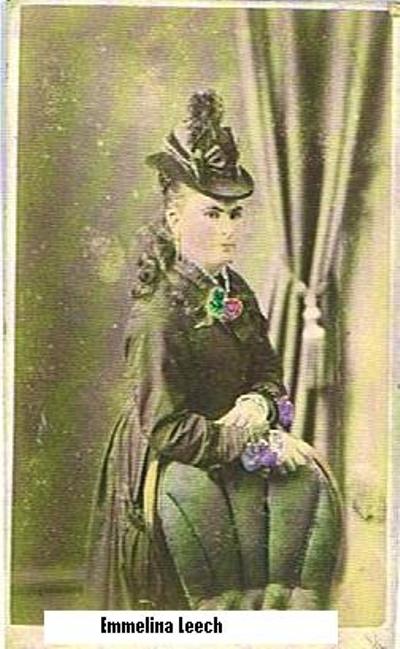 In his will Edward again referred to himself as a stonemason and living at Leechs building, Botany Road, Waterloo. Can it be construed that he was successful at his trade over his lifetime?